Palby Marine is the largest wholesaler in Denmark of maritime equipment and spare parts. The company sells all types of boat equipment through a network of dealers, stores, repair shops and ship builders across Denmark.

The company was an early adopter of automation to optimize their warehouse operation. Having examined what was on offer from a range of suppliers, they chose the Constructor Tornado Automated Vertical Storage Machine. The first order was placed in 2009 for two of these dynamic storage and retrieval systems, with subsequent purchases in 2011 and 2015. These ultra-quiet, computer-controlled storage and transfer lift systems use the goods-to-person principle. By cutting walking, waiting and search times, it not only boosts handling efficiency by up to 65%, but also increase floor space capacity by up to 70%.

When Palby Marine wanted to reorganize and introduce batch-picking to their operation in 2016, they knew exactly what they needed and a further two Tornado machines were ordered. 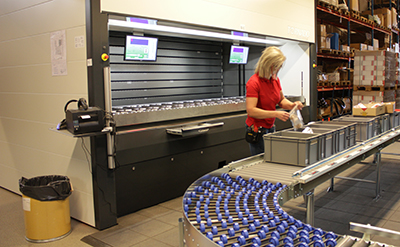 With an annual supply of between 1,000 to 2,000 new items from both existing and new suppliers, Palby Marine has a constant challenge in terms of storage capacity. They have over 10,000 items in stock and aim to send all orders out within a day of ordering.

The Tornado system clearly works well for them. Building on the relationship that had already been established over the years, Constructor’s understanding of the business needs meant they were able to complete the installation during the relatively quiet low season. This was important as ceilings needed to be removed to make room for the new machines, and once installed, articles moved to free up space for new pallet racking.

When it comes to batch-picking, the Tornados make it easy as multiple items can be stored in a way that suits the company. With up to 2500 daily picks, they no longer have to worry about finding small or slow moving items as the Tornado does this automatically for the majority of items.

“When we have many orders e.g. in the peak season, it is a huge benefit to have the batch- picking system. It works really well, especially thanks to the position indicators that show which box the pick relates to. We have spent quite some energy and money adapting our Axapta ERP system and integrating TC+, the control system of the machines. In general, we have very little downtime which is always important.

When we started out with investing in machines, the aim was to end up having four machines. However, we are storing more small goods than expected, and at the same time we have achieved considerable benefits in terms of time and space saving, so now we actually plan to invest in more machines going forward.”
Carsten Halling, Warehouse manager.

Palby Marine is Denmark's largest wholesaler of marine equipment and spare parts. They sell all types of boat equipment that are imported from all over the world. www.palby.dk